Department of Psychology, College of Arts and Sciences

Congratulations to James Catlin, who will be returning to UB! 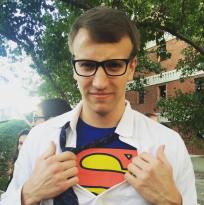 After a stint at the University of Florida, where he worked with Dr. Sylvain Doré on traumatic brain injury, James Catlin has accepted an offer to continue his work in the Biological Sciences program at UB.  As an undergraduate, James was a honors student in Biological Sciences at UB, and worked in the MeyerLab from 2013-2014.  During this time, James worked on projects involving the effects of alcohol and nicotine on the brain’s motivational pathway, including studies involving cue-dependent drug seeking behavior. He also utilized cadherin 13 knockout rats to determine the role of this gene in cocaine-induced conditioned place preference. James presented these data at an honors symposium in biological sciences, and his results were featured in other MeyerLab posters as well: